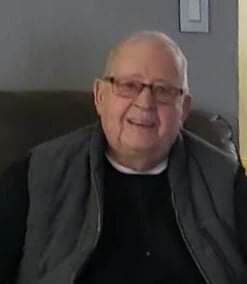 Passed peacefully at home, just shy of this 90th birthday. Doug is reunited with Sandy, his wife and soul mate, who he has missed tremendously for nearly 12 years. He is survived by his children Sherry (Rod), Danny (Tracy), Niki (Steve) and Merri-Lee (Jamie), his grandchildren Rebecca, Leah, Brittany, Dakota, Reillee, Codi and Zak, and great-grandchildren Abigail, Kylie, Chloe, Logan, Samuel, Ryner, Cypress, Easton and Theodore. Doug is predeceased by his siblings, Ron and Gail, his granddaughter Stephanie, and best friends Pete, Bud and Lolly, and his best little fur buddy, Fritzie.

Doug was born and raised in Burk’s Falls, Ontario where he spent most of his life as a businessman and entrepreneur. He owned and operated a Texaco gas station, D.E. Culbert Fuels, and delivered fuel to customers all over the area for several decades. He also owned a Ski-Doo dealership, and then The Country Bumpkin Restaurant on Highway 11 together with Sandy. They became avid campers when they retired in 1988 and spent many years ‘trailering’ with friends and family in their Fifth Wheel. Doug and Sandy travelled all over Canada and to Alaska before moving to Fort Erie in 2002, making that their new home. Doug was an avid Senators fan, loved bagpipes, campfires and hugs, earning himself the nickname, Huggie Dougie.

The family would like to extend special thanks to his PSW Christine, his home nurses Elizabeth and Shelley, and to his doctors Dr. Che, Dr. Lagrotteria, Dr. Tatzel and Dr.Scher for the care and compassion they gave Doug.  Our heartfelt thanks as well for the incredible care provided at every level, from paramedics to the nursing staff at Welland Hospital who continue to work under the most difficult of circumstances ,,, your efforts are truly appreciated.

As per Doug’s wishes, cremation will take place under the care of Williams Funeral Home, Ridgeway, Ontario. A celebration of life will take place at a later date when everyone can gather together, share hugs and raise a toast.

Donations to the Niagara Health System or Home Hospice Association would be appreciated by the family.