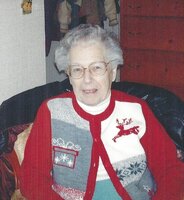 Ruth Edith Eberly (nee Everets) passed away peacefully in her sleep on March 9, 2022 in her 96th year.  Ruth is now reunited with our father, Walter, in heaven.

After Ruth married Walter, they lived for over 50 years in Stevensville, Ontario on a 50-acre farm, just down the road from the original Eberly homestead, surrounded by family and lifelong friends.  Ever gracious and strong in her faith, Ruth was a long-time member of St. John’s Lutheran Church in Snyder, Ontario.  A leader of the Ladies Aid, she was an avid quilter, and helped with preparing food at St John’s for funerals, marriages, anniversaries and other special occasions.  Mom knitted teddy bears, sewed Raggedy Ann and Andy dolls, Holly Hobby dolls and made innumerable Barbie clothes.  When the kids were lucky, she baked pies, affectionately called “seldom” by her husband and the children.

After Walter’s passing in 2004, Ruth moved to Caledon, Ontario and lived with Jim and Maureen, making fast friends with Jean Wilson, another octogenarian, who lived just down the road.  With Jean, Ruth played cards and even square danced at the local community centre.  She enjoyed watching Gaither Gospel Hour at home.  Ruth then lived with Barry in Ridgeway, Ontario for a number of years, once again attending St. John’s before she decided to finally “retire” and moved to the Maple Lodge Retirement residence in Simcoe, Ontario, near Judy.

Our mother was family-oriented and thoroughly enjoyed visits with family and friends, especially gatherings attended by her nieces, nephews, grandchildren and great-grandchildren.

The funeral service will be held at St. John’s Lutheran Church, 3837 Netherby Road, Snyder Ontario on Monday March 14th with a 1-hour viewing at 1 pm followed by a 2 pm service and internment.

All attending will be required to wear face masks and respect social distancing.

A special thank you to Stepan, Paula and the staff of Maple Lodge Retirement Residence, Simcoe as well as the doctors, nurses & staff at Norfolk General Hospital.

Donations, in lieu of flowers, may be made to St. John’s Lutheran Church, Snyder and/or The Canadian Cancer Society.

“Don’t let your hearts be troubled.  Trust God, and trust also in me.  There is more than enough room in my Father’s home.  If this were not so, would I have told you that I am going to prepare a place for you?  When everything is ready, I will come and get you, so that you will always be with me where I am.”   JOHN  14:  1 - 3